I’m letting the Word speak for itself today.  Thanks, BibleGateway! 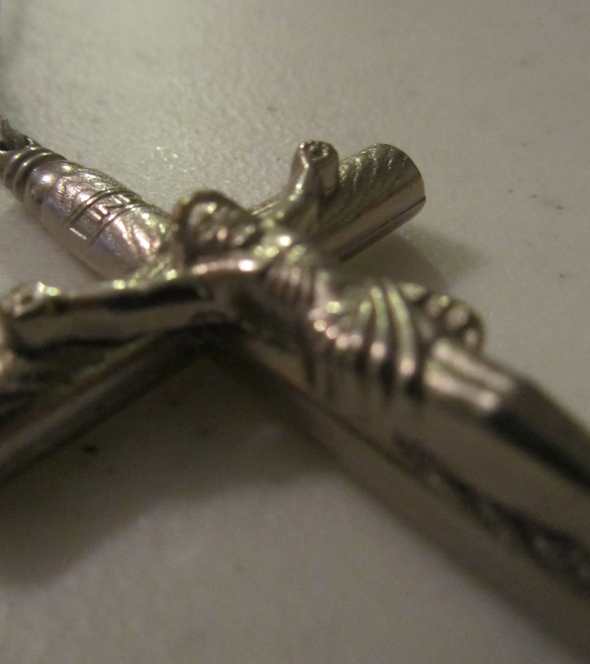 1 Then Pilate had Jesus flogged with a lead-tipped whip. 2 The soldiers wove a crown of thorns and put it on his head, and they put a purple robe on him. 3 “Hail! King of the Jews!” they mocked, as they slapped him across the face. 4 Pilate went outside again and said to the people, “I am going to bring him out to you now, but understand clearly that I find him not guilty.” 5 Then Jesus came out wearing the crown of thorns and the purple robe. And Pilate said, “Look, here is the man!”

6 When they saw him, the leading priests and Temple guards began shouting, “Crucify him! Crucify him!”

“Take him yourselves and crucify him,” Pilate said. “I find him not guilty.”

7 The Jewish leaders replied, “By our law he ought to die because he called himself the Son of God.”

8 When Pilate heard this, he was more frightened than ever. 9 He took Jesus back into the headquarters[a] again and asked him, “Where are you from?” But Jesus gave no answer. 10 “Why don’t you talk to me?” Pilate demanded. “Don’t you realize that I have the power to release you or crucify you?”

11 Then Jesus said, “You would have no power over me at all unless it were given to you from above. So the one who handed me over to you has the greater sin.”

12 Then Pilate tried to release him, but the Jewish leaders shouted, “If you release this man, you are no ‘friend of Caesar.’[b]Anyone who declares himself a king is a rebel against Caesar.”

13 When they said this, Pilate brought Jesus out to them again. Then Pilate sat down on the judgment seat on the platform that is called the Stone Pavement (in Hebrew, Gabbatha). 14 It was now about noon on the day of preparation for the Passover. And Pilate said to the people,[c] “Look, here is your king!”

“What? Crucify your king?” Pilate asked.

“We have no king but Caesar,” the leading priests shouted back.

16 Then Pilate turned Jesus over to them to be crucified.

So they took Jesus away. 17 Carrying the cross by himself, he went to the place called Place of the Skull (in Hebrew,Golgotha). 18 There they nailed him to the cross. Two others were crucified with him, one on either side, with Jesus between them. 19 And Pilate posted a sign over him that read, “Jesus of Nazareth,[d] the King of the Jews.” 20 The place where Jesus was crucified was near the city, and the sign was written in Hebrew, Latin, and Greek, so that many people could read it. 21 Then the leading priests objected and said to Pilate, “Change it from ‘The King of the Jews’ to ‘He said, I am King of the Jews.’”

23 When the soldiers had crucified Jesus, they divided his clothes among the four of them. They also took his robe, but it was seamless, woven in one piece from top to bottom. 24 So they said, “Rather than tearing it apart, let’s throw dice[e] for it.” This fulfilled the Scripture that says, “They divided my garments among themselves and threw dice for my clothing.”[f] So that is what they did.

25 Standing near the cross were Jesus’ mother, and his mother’s sister, Mary (the wife of Clopas), and Mary Magdalene. 26 When Jesus saw his mother standing there beside the disciple he loved, he said to her, “Dear woman, here is your son.” 27 And he said to this disciple, “Here is your mother.” And from then on this disciple took her into his home.

The Death of Jesus

28 Jesus knew that his mission was now finished, and to fulfill Scripture he said, “I am thirsty.”[g] 29 A jar of sour wine was sitting there, so they soaked a sponge in it, put it on a hyssop branch, and held it up to his lips. 30 When Jesus had tasted it, he said, “It is finished!” Then he bowed his head and released his spirit. 31 It was the day of preparation, and the Jewish leaders didn’t want the bodies hanging there the next day, which was the Sabbath (and a very special Sabbath, because it was the Passover). So they asked Pilate to hasten their deaths by ordering that their legs be broken. Then their bodies could be taken down. 32 So the soldiers came and broke the legs of the two men crucified with Jesus. 33 But when they came to Jesus, they saw that he was already dead, so they didn’t break his legs. 34 One of the soldiers, however, pierced his side with a spear, and immediately blood and water flowed out. 35 (This report is from an eyewitness giving an accurate account. He speaks the truth so that you also can believe.[h])36 These things happened in fulfillment of the Scriptures that say, “Not one of his bones will be broken,”[i] 37 and “They will look on the one they pierced.”[j]