← This little light of mine…
Southern Barton Heights Missional Community → 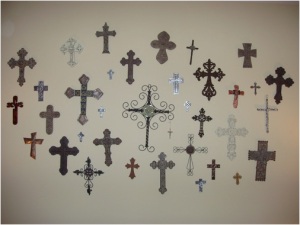 6 Observe the commands of the LORD your God, walking in his ways and revering him. 7 For the LORD your God is bringing you into a good land—a land with streams and pools of water, with springs flowing in the valleys and hills; 8 a land with wheat and barley, vines and fig trees, pomegranates, olive oil and honey; 9 a land where bread will not be scarce and you will lack nothing; a land where the rocks are iron and you can dig copper out of the hills.

I went on to work on that 2nd day of praying in Jesus name over my singleness.  Within just a couple of hours…my phone rang.  A colleague of mine, Steve, called to ask me if I wouldn’t mind hanging out with a friend of his, Kevin.  Kevin just happened to be coming to town from the West Coast.  Steve and his wife had plans that had them tied up on Friday night, that would leave Kevin alone for the evening.  So, he wanted me to go to dinner with him so that he wouldn’t have to hang out in the hotel by himself.  Needless to say…I stopped and literally looked at the phone…and said, ‘did God just answer my prayer in a matter of hours?’  Why is it that I, and maybe you to, find it surprising that God answers our prayers?  Shouldn’t we expect the answer to our prayers?

After being in shock (and scared to death!!!) for a few days, I finally gave in to Steve…and to God.  I picked up Kevin at the hotel (another funny…but long story…).  Because I hadn’t gotten to go home yet, I asked Kevin if he minded if we stopped by my house so that I could freshen up.  We walked into my house, where I had a wall of crosses on the left inside the front door (so they wouldn’t be missed).  The wall of crosses started as a small collection representing each member of my family.  I understand that it is a Latin American tradition.  It has now grown to a wall of about 40 crosses of different sizes and materials.  Kevin was captivated by it.  I could tell that this was a God moment, as Kevin was literally drawn to the wall and proceeded to take them in.  I said a quick silent prayer and left Kevin alone…with God and the crosses, and went upstairs to change and freshen up.

Kevin later described his moment as ‘holy’ and ‘warm’.  We had a great conversation about the wall, its meaning, and its impact. He shared his favorite with me…and how it reminded him of Peter or one of the other disciples crafting it while sitting on a hill listening to the word of Jesus.  He then shared his ‘life scripture’ with me….Deuteronomy 8.  Kevin owns his own company…where times have been good and bad.  But, regardless of the time, God is always faithful.  These are notes from my journal… “God is bringing you into a good land where you will lack nothing.  Praise the Lord for the good land.  Do not forget the Lord or stop following His commandments.  Do not become proud.  Remember the Lord who provided this, gave you the ability to do this – produce wealth .  Remember the Lord, your God, or face destruction.”

I meditated on this Word every day for the next week or so when I received a sizable amount of money that I was not expecting.  I was totally shocked!  What was I going to do with this money?  I wanted a fence.  I wanted a shed.  I wanted a new car.  (almost NEEDED a new car).  But, I knew I needed to be sacrificial with the money.

After giving money to some needs in my family, I also wrote Rob (remember Rob….my pastor at the new church?) to let him know that I was going to be giving a ‘chunk of change’ to my church.  Didn’t care what it went to, as I trusted him and our board, but I just felt led that day at that exact moment to let him know..as it was about a month later.  I felt like there was more to the story.  God was up to something!  Because I was overwhelmed with the need to e-mail Robby on that Thursday even though it was his day off.

Rob e-mailed the next day following a church planning meeting.  Later, at Starbucks, Rob shared that there had been a struggle between a list of projects/ministries they felt we were being led to do in 2006 and the budget…the fine line between faith and using the common sense that God gave us.  God has used me (and Kevin…and Steve…and the provider of the money) to send a message to our church leadership….not that my money would solve the problem because it wasn’t THAT much!!!…but, to let them know that God would provide and to walk in faith.

When you take God seriously in your life…as a living sacrifice…He will use you.  Hold on!!!  Praise the Lord!  As my friend Marcus taught me…”Hold my rope while I shout!”-Shirley Ceasar.   My encouragement to you….when you take God seriously and read and meditate on the Word, expect God to use you….and be obedient to that which he asks – be ready!  I often wonder…did these moments happen in the past?  Did I miss them?  How many God-moments had I missed in my life?  How many times had I ignored what He asked me to do?  What would have happened if at any point one of us didn’t do what He asked us to do?

Friends, co-workers, strangers, etc…forgive me…for not always being obedient to what God has asked me to do.

I pray that He will give me another chance to be obedient again…for each time I have missed.  And I pray…that I don’t miss them again.

2 Comments on “Forgive Me…”