Revised…6/22 – Provided the report. Click the image below to be taken to the full report.

I was invited to attend the Second Annual Family and Fatherhood Forum at the Crown Plaza on Friday, June 18 at the Crown Plaza here in Richmond sponsored by First Things First, Richmond Healthy Start, Virginia Department of Social Services, Richmond City Health District, and the Virginia Department of Health. It was a well-attended follow-up to the meeting held at the same time last year….the Friday before Father’s Day! 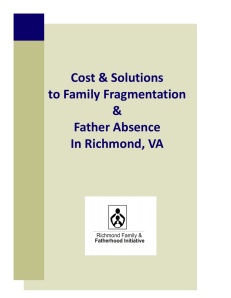 We were welcomed by Byron Marshall, CAO for Mayor Jones. Brian Gullins, Family and Fatherhood Initiative Coordinator for the Richmond City Health District, reviewed the results of a Study called the Cost and Solutions to Family Fragmentation and Father Absence in Richmond, VA.  There was a panel discussing alternatives to incarceration consisting of Michael Herring, Richmond Commonwealth Attorney, CT Woody, Sheriff – Richmond City, and Philip White, Fatherhood Program, Henrico County.

The keynote speaker, Roland Warren, President National Fatherhood Initiative, spoke about the Pillars of Culture that impacts our view of Fatherhood….Business, Entertainment/Pop Culture and Government. We were charged with finding ways to connect kids with more than their father’s wallet. Once you get to the heart, the wallet is a short reach from there.

The moral, social, economic, and spiritual costs are outstanding FOR US ALL! If you sit in the suburbs, don’t think this doesn’t impact you! If you are white and saying it’s a “black” thing…think again! If you sit in Windsor Farms, the Fan or the county, this too impacts you! Although this report was about the City itself, its impacts are far reaching. I’d dare say that it was a problem in the counties as well, or Henrico wouldn’t have Fatherhood program of its own. Family Fragmentation and Father Absence is rampant throughout the Metro Richmond area.

This report was calculated based on the work and methodology of native Richmonder Benjamin Scafidi, PhD. From the Georgia Family Councel. It states…“The link between poverty and family fragmentation has been well researched and is widely accepted. Family fragmentation and father absence has caused an increase in taxpayer cost to antipoverty programs, justice system costs (courts, police, prisons, jails) present the most likely source for redirecting funds into preventative, alternative and reentry programs as those presented in the Solutions portion of this report.”

Looking at just one aspect of the study – Percent of Non-Marital Births around Richmond City, VA Residents, the percentage hovered around 10% from 1917 with slight increases in the 50’s. Then, HUGE increases over the years until we landed at nearly 65% in 2007.

The report goes on to say…“Based on this methodology we estimate that family fragmentation in Richmond costs taxpayers at least $205 million each year or over a billion every 5 years.” However, with slight decreases come large increases! The report also states that with just 1% reduction in family fragmentation would save US taxpayers $1.1 billion each year, bringing nearly $2million savings in Richmond each and every year.

So…how can we not think that this doesn’t deserve our attention? that SOMETHING must be done? that these statistics aren’t startling? 1% isn’t that much! We CAN do this! But, how?

The report went on to summarize the 1% Solution with action items under each of the following solutions.

I hope this gets you…

how can I get involved?

And…as the church….what is our role?  how and where should WE get involved?

Laugh Your Way to a Better Marriage – LIVE

Laugh Your Way to a Better Marriage LIVE

This is a marriage conference like you have never seen and there are “No Workbooks.”   Take a humorous look at the differences between men and women to help understand and appreciate own spouses. Rev Mark Gungor is gut wrenching funny and provocative… don’t miss this life changing and fun event.  All are welcome…engaged or married for a while!

Early and Group registration is only $30 per person. Limited childcare is available.

Early registration only $30 pp at http://www.laughyourway.com/events/2010/08/Richmond-VA/

If you want flyers to hand out, click here. > LYW Flyer

Louis and I hope to see you there!