My friend, Cindy Mims recently discovered a booklet called Rediscover the Barton Heights Community provided by Richmond Neighborhood Housing Services…now known as NeighborWorks Resource Group.  It was produced with funds from the US Department of Housing and Urban Development through the City of Richmond’s Community Development and Block Grant Program.  It was designed and information compiled by NorthLight Publishing (2/95).

So, I learned something new….and I am REALLY excited about it!!!

First, the booklet claims on page 5 that “An array of promotional advertising described the community as ‘a children’s paradise, a model village and an oasis in the desert of hard times for the working man.’” That really brings me hope! And this work…our ministry…once again reminds me of Ezra and Nehemiah rebuilding Jerusalem.

Second, on pages 9-10 it talks about the churches back in the day.  It describes how a group of 16 residents were meeting in a one resident’s living room to study the Word.  Then it goes on to say,

“After several meetings in private homes the Sunday school met at the Wigwam, a community building located at the northeast corner of Barton Avenue and Roberts Street.  The Wigwam, noted as an odd-shaped wooden structure, was the scene of many community activities including dances….While meeting at the Wigwam, the church slowly grew from the original sixteen to twenty-seven members: nine women and eighteen men. Soon the church decided to take a venture in faith and build a permanent church home.”

My friends and readers…it is awesome to report…that Miss Marti’s House stands at that very corner….the NE corner of Barton and Roberts. 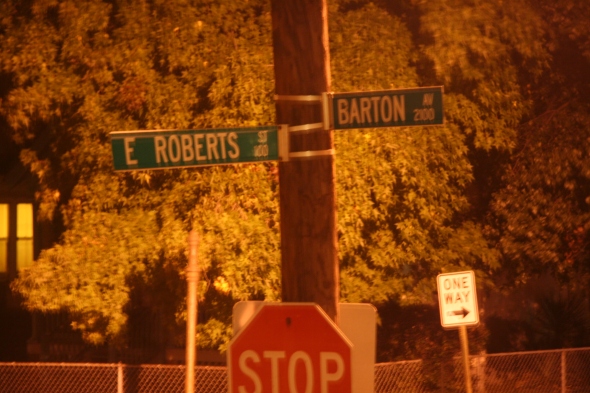 The Corner of the Wigwam and Miss Marti's House

Lastly, this led me to do a little more research.  A quick internet search brought me to more historic information on Barton Heights on a website:  www.livingplaces.com.  More on the Wigwam from that site:

“The first building to serve the neighborhood’s religious congregations was the Wigwam (1891) at the corner of Barton and Roberts (No. 2017). Originally a community center, its early date reflected the tight community being established…It was the Methodists who first used the Wigwam before they built their new sanctuary in 1893 on North Avenue.…The Barton Heights Baptist Church was also first organized in the Wigwam.”

I have always thought of my home, my space, my property…Miss Marti’s House…as holy ground…a house of peace…God’s house.  It is so cool to pick up on the past….the history of the NE corner of Barton and Roberts…and continue God’s work over a century later….as a community center AND as a place where people meet to study the Word…the beginning of not just 1 church, but 2….maybe there will be 3?!?!?  But, I am not thinking about building A church…but about building THE church!

The current history of many corners throughout SBH includes prostitution, drug deals, loitering, etc.  But I have hope that from this corner…the NE corner of Barton and Roberts…stands a Light…a Light in the darkness.

What else might the Lord want to use this corner for?  Could it be to bring hope, healing and health to a community that strives to again be known for ‘a children’s paradise, a model village and an oasis in the desert…”?

12 Your people will rebuild the ancient ruins
and will raise up the age-old foundations;
you will be called Repairer of Broken Walls,
Restorer of Streets with Dwellings.