← Check out my new fav blog!
a beautiful day with beautiful friends… →

After reeling off my medical information, Louis was released from his job as first aid provider before I was.  He went to check on the kids.  I reminded him of the meat on the grill…which he had already thought of while on his way out of the house earlier.  (See how the Holy Spirit guided us through it all?!?!?)  It was funny when the paramedics asked if I was a nurse and I told them No…I got my medical training watching Marcus Welby and Medical Center as a child and ER as an adult.  My extensive medical expertise must have given it away.  🙂  I was finally released from my position and the paramedics took him away (it took 3 men to lift him on the gurney…as Frank was not a little guy!). 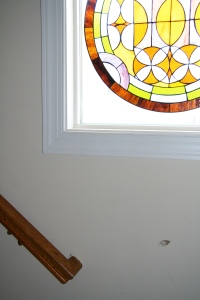 inside bullet hole at bottom of the stairs

Although the detectives wanted to speak to me right away, I was allowed to go inside and change my clothes.  When I entered into the house to head up the steps, I had a surprise waiting on me….a bullet hole under the window at the bottom of the steps.  Yes, a stray bullet came inside the house.  I am soo thankful that no one was climbing the steps at that time!!!  So now…we have experienced a little Law and Order, some ER and now we have CSI goin’ on.

While sitting at the dining room table talking to the detectives, I heard some wailing, screaming and crying outside.  I wanted to desperately go and console whoever it was, but needed to give my account of what had happened.  Later, I learned that it was Frank’s mom.

Nichelle, my neighbor and true sister, came over and sat with us on the front porch.  I am grateful for Nichelle, as she brought a peace along with her.  I called a few prayer warriors to cover us during this time. Although I left out a few of the details, I, surprisingly, called my mom as well and told her what was going on so that she could pray.  I was worried that it would make the news and didn’t want her to see it there.  But, I also didn’t want her to worry.

bullet hole from outside

After everyone was gone and it’s about 11:30pm, Louis and I finally get to eat our dinner…while standing up at the kitchen counter…eating our pork tenderloin with onions with our fingers.  You could tell the adrenaline was pumpin’!  This is when we both agreed that we HAD to go to the hospital.  So, Louis and I venture up to MCV.  If that was my brother, son, friend, husband, boyfriend…I would want to know what we knew.

It is in the Gateway Building of MCV that our relationship truly started to develop.  This is a story of racial reconciliation, a story of grace and mercy, a story of faith….

This true account is what gives me my life…and mission….scripture….

The Word became flesh…and moved into the neighborhood.

2 Comments on “The Word Became Flesh…”