A Barber, a Yoke and a Baptism Part 2

So…I took Marcellous to Commonwealth Chapel one Saturday night.  We had been praying for him for MONTHS.  So, it was awesome when some of my prayer warrior friends were able to put a name with a face.  Marcellous just couldn’t believe that people greeted him so warmly…and knew his name…and wanted to meet him.  He was so full of joy.  And…let me tell you…can that man sing!!!  What a beautiful voice he has!!!  Very impressive!

Marcellous shared this story with me a few days before his baptism.  We were in the emergency room during another scare.  When he was in the hospital a previous time, he had been in a diabetic coma (i guess!).  While in this coma, he was fighting and running…and everything was dark and scary.  Then, the skies turned blue and bright and a big hand came down and scooped him up.  When he looked up, he saw KK and me like angels.  He felt at such peace.  It didn’t take him long to realize that it was the hand of God.  That he had been fighting for his life…both physically and spiritually…and that God rescued him.  Marcellous simply said, “God gave me a 2nd chance, and that He must want something from me”.  I said he does…he just wants your heart.  Nothing more.  God wasn’t like anything that Marcellous knew from the street.  There was no scam. There was no hustle.  There was no hidden agenda.  All God wanted was him, Marcellous. Pure and Simple.

Marcellous quietly asked, “why did he have to wait 52 years?”  I had a hard time answering that question.  After searching through the Word, I found the perfect scripture in 2nd Peter 3:8-9.  Let me summarize it for you…our God is a patient God.  1 day is like a 1000 years and a 1000 years is like 1 day.  He is patiently waiting for everyone.

That is so comforting to know.  For those of us who are still waiting on our friends and family to know Jesus, we can be encouraged to know that our God is a patient God.

If you are one who doesn’t know Jesus….know that His yoke is light.  If you are tired, weary, and burdened, like Marcellous, know that the Lord is patient…and He is waiting for you.

﻿After attending Commonwealth Chapel, Marcellous stated that he wanted to be baptized.  I am happy to report, that although Marcellous was weak, his foot was still bandaged, and he was unable to walk, we baptized him in the name of the Father, the Son and the Holy Spirit on Tuesday, July 23rd, 2007, 1 week  before his 53rd birthday.  We celebrated with him his new birth and his birthday.  What an awesome day!! Marcellous had also reconciled with his family during this time.  While he was in the coma, we were able to track them down knowing what little we did about him….and with the help of the internet…we were able to find his sisters!!!  I mean really….I couldn’t make this stuff up!!!

Within 2 days, Marcellous had gone to live with his sister in NC.  KK now lives with them as well.  I still pray for them, as KK adjusts and grieves for his mother…and his youth and his identity.

People used to always tell me – “Marti – You can’t save ’em all!”  And that is true.  I actually can’t save ANY of them.  But…my God can!  This keeps me praying for them both, even though we have lost contact over the years.  Those months that KK lived with me were HARD…for so many reasons.  Time and time again…KK betrayed me and my trust.  I cried A LOT during this time.  You can even ask my dentist, Dr Jeff Friend.  I actually cried in the dental chair one time!  I know…it’s ridiculous.  But, KK was not heading in the right direction…at all.  I still pray that in the middle of whatever craziness KK may go through…that he will remember what it was like to be loved…unconditionally….no matter what.

It makes me think….how in the world must God feel about me.  In the midst of all of my craziness….and stupid stuff…bad choices…He still loves me in spite of all that mess.  How I must break his heart when I try to do it on my own…and really mess things up.  But…He is always there for me.  24/7/365.  I am thankful that the hand of God….reaches down and scoops me up!  I’m grateful that He is patient with me.

Enjoy the pics of Marcellous, Emmanuel, and Marc.  In addition…there’s Riste and Butch who had the honor of baptizing him.  Thanks to all my praying friends…who prayed with and for me during this time!!!  I couldn’t have made it through without you!!!! 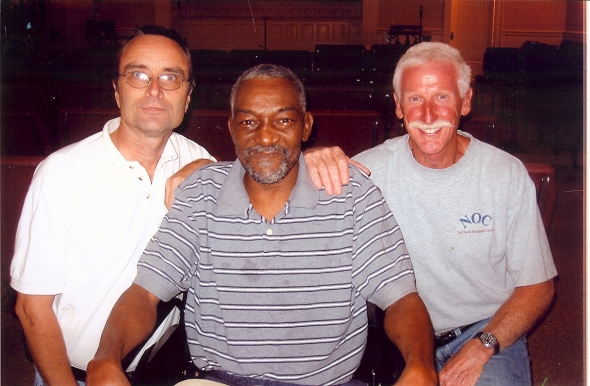